Zeus is a language neutral programmer's IDE for the Windows platform.

The latest release also comes with many Zeus macros allowing the IDE to better work with Rust tools like Racer for auto-complete, documentation and code navigation and tools like rustfmt for automatic code formating.

IMPORTANT NOTE: For Zeus to work with Rust it is assumed Rust has been installed on the machine. For details on how to setup Rust refer to this link. 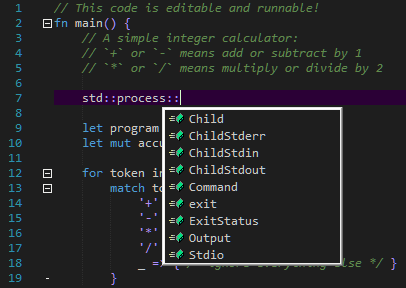 NOTE: For historical reason some of the links below contain macro code, but there is no need to copy that code as these scripts now come as part of the installation process.

Support for the Rust Toolchain

By default Zeus comes configured to work with the Rust toolchain, meaning Rust files can be compiled directly from inside the IDE.

By default Zeus runs the rustfmt each time the file is saved, however this feature is totally configurable.

The default Zeus installation has macros designed to work with Racer to provide autocompletion, code navigation and tooltip information. More details about these features can be found here.

Many more general purpose scripting examples can be found here.